We are so happy to see Sebastian and Morgan featured in the Comox Valley Record newspaper.

Kitto Real Estate Team is the official sponsor of the Vanier Senior Boys Rugby Program and is a big supporter of Comox Valley sports and Comox Valley Football in particular.

We are all looking forward to seeing you play this year, we are pulling for you 100%! Have a great season! Congratulations to @sebastian.lambert7 and @morgancrisp05 for all their hard work and dedication to their sports and academics! Way to go guys! 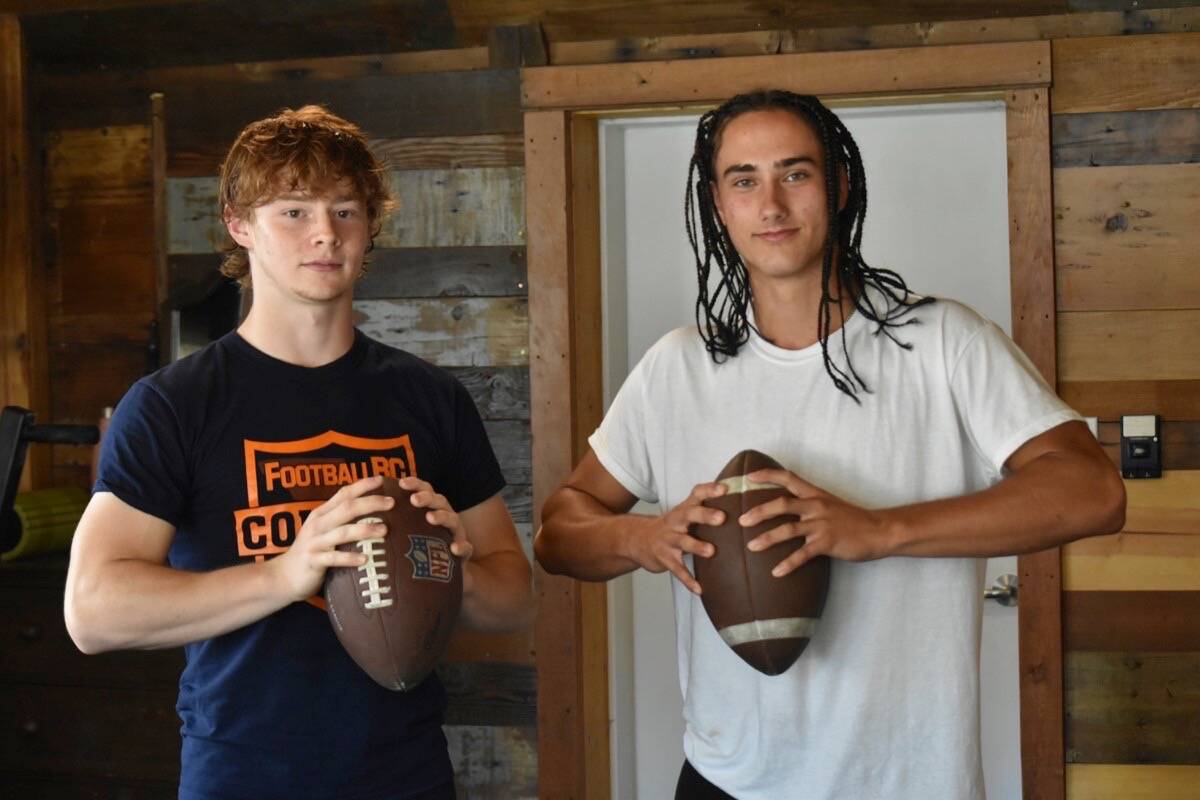 The Comox Valley Raiders are hoping the one-two punch of quarterback Morgan Crisp and wide receiver Sebastian Lambert will lead the football club to a provincial championship this year.

The pair of Grade 12 students at Vanier Secondary are among the best football players in their age group in B.C. This summer, they both had MVP performances at a provincial showcase game in Langley, winning Super Bowl-style rings.

“There’s only two of them in B.C. with those rings, and they’re here in the valley,” said coach Aaron Kitto, who provides the 17-year-olds with extra strength training at his Courtenay home. “They’ve been training really hard for a year to get to the level they’re at now. Both of them have put on about 25 pounds since last year.”

Last season, Morgan earned team MVP honours while Sebastian was offensive MVP for the Raiders. Their team lost by a touchdown to North Surrey in the dying minutes of the 9-man midget provincial championship final. The squad was also runner-up in league play.

This year, the goal is to go undefeated en route to a B.C. championship.

Along with football, Morgan and Sebastian are two of the best rugby players in B.C. They were both members of Vanier’s senior sevens team that finished fourth at provincials, though Kitto figures the team might have won had Sebastian not sustained a shoulder injury.

“They were looking really good. They had beaten the number one ranked team (Stelly’s Secondary) by 30 points,” said Kitto, a local Realtor who sponsors the Vanier side. “Barring injuries and if they get support from the rest of the team, they should win (B.C.’s) this year.”

At school, both players are honour roll students.

After high school, Sebastian plans to pursue football at Washington State or possibly the University of B.C.

“Keep playing through university, see if I can go past that,” said Sebastian, who is also a sprinter. He has run 11.65 seconds over 100 metres — a significant drop from the 12.5 he registered in his first year in track and field.

“That’s the hope,” said Morgan, who attended the Manning Passing Academy this summer in Louisiana. Brothers Eli and Peyton Manning — both Super Bowl-winning quarterbacks — made an appearance at the academy.

“That’s an example of the extra effort he’s putting in,” Kitto said of Morgan.